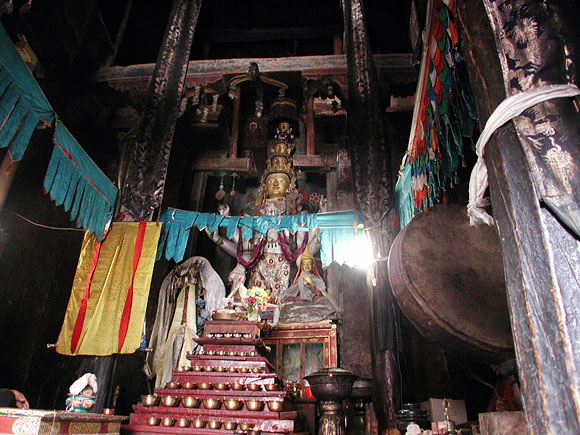 Description of paintings and sculpture

The interior of the Wanla temple is dominated by the three large standing sculptures in the niches at the back (south) and the sides. The larger niche in the back, facing the entering visitor, reaches into the gallery level and houses the main image. The side niches end at the height of the ground floor ceiling.

The main niche is occupied by the white Bodhisattva Avalokiteśvara in his eleven-headed and eight-armed form. This image gives the temple its present name Chuchig-zhal (bCu-gcig-zhal) “Eleven-headed”. The main pair of hands performs the veneration gesture in front of the breast. Of the other hands, the two middle ones hold attributes, an arrow in the proper right and a bow in the left. This form is different from the thousand-armed version shown on the left wall of the Maitreya niche, not only in terms of number of arms, but also in the colouring of the faces. It may thus be unlikely that additional arms have been painted on the back wall of the main image.

The left-hand niche (to the proper right of the central image) contains an image of an originally silver-coloured Bodhisattva Maitreya (only in 1996 was this image repainted in white). Opposite Maitreya is the monumental image of Śākyamuni in monastic robes. The main image has a height of approximately 5 meters and the side images are 3.40 m high.

In the sculptural programme at Wanla the central eleven-faced and eight-armed form of the ‘Great Compassionate One’ (Thugs-rje-chen-po) is invoked for remedy of daily misery and can therefore be understood as acting in the present. Together with the flanking future and past Buddhas the sculptures simply signify the continuity or continuous accessibility of the Buddha’s teaching.

Stylistically roughly contemporary with the clay images is the group of paper-mâché sculptures representing the generic Kagyüpa (bKa’-brgyud-pa) lineage headed by Vajradhara, Tilopa and Naropa. As in the paintings, the figures in the linage can only be identified up to Milarepa. The succession of the teachers following Milarepa can thus not be reconstructed any more. These sculptures were apparently made to be placed on the shallow backside of the gallery flanking the heads of Avalokiteśvara. 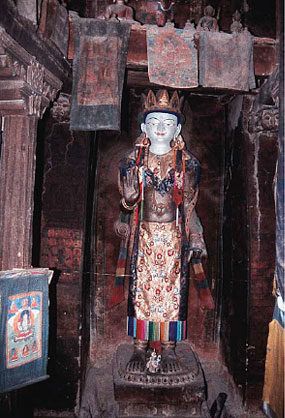 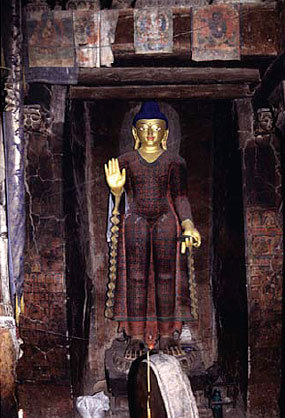 All three storeys, including the niches, are covered with largely original murals, about 80-90% originate from the time when the temple was erected. In the early 1990ies most of the murals were hardly visible due to the thick coating of soot and until a few years ago a bookshelf flanking the altar in front of the main niche obscured a considerable section of the murals. However, cleaning efforts as well as a detailed photographic documentation now allow for a comprehensive survey of the murals' content.

The ground floor paintings have by far the most complex iconographic programme of the temple. Certain hierarchies within the programme, such as the depiction of simpler less esoteric topics in the entrance area and more complex esoteric ones in the back of the temple, can be recognized quite immediately, but after a careful study of all topics it is difficult to imagine that there was a detailed underlying programme. Like the sculptural decoration, the murals of Wanla, too, are evidence of a marked shift from earlier iconographic programmes such as those at Tabo or Alchi. The inscription mentions that all aspects of the Buddhist teachings of that time – ‘old and new’ – are present in the decoration assembled in the extensive pantheon covering all the walls.

Indeed, the iconographic programme is characterised by a mixture of deities that had been prominent in earlier Western Himalayan monuments, and deities of iconographic themes ‘new’ to the region. However, the main focus is clearly on the themes new to the region and in particular on diverse mandala assemblies of the highest tantra class. Surprisingly, a considerable amount of these topics otherwise is closely associated with the Nyingmapa school.

The old topics, in contrast, take a secondary position in the painting program, the Dharmadhātuvāgiśvaramañjuśrī mandala receiving most attention by being represented on the wall to the right of the main niche.

Although the Avalokiteśvara niche was altered the most, the principal iconographic features are preserved. However, the paintings here could only be studied and documented cursorily, since this area was only accessible very few times and an investigation is difficult as the sculpture block the access to the walls.

The founding inscription is located immediately to the left of the Maitreya niche, and the donor assemblies are found beneath it and on the wall opposite to it (to the right of the Śākyamuni niche). 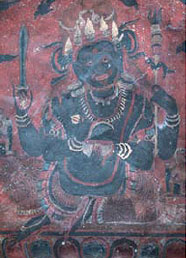 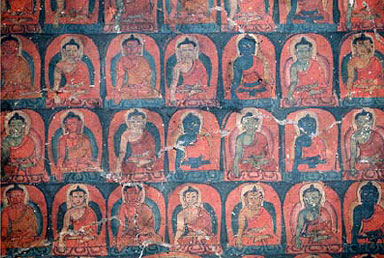 Among the iconographic features already known from earlier monuments in the region, particularly from Alchi, the following are of note. As at Alchi, Mahākāla, flanked by protectresses, takes the position above the two doors. Of the mandala attributed to the Yoga-Tantra class, the dominant class in the earlier art in the region, the Vajradhātumandala has a secondary position among the temple’s paintings and also occurs as the root mandala of the Sarvadurgatipariśodhanatantra as described by Vajravarman. A more prominent position, to the right of the main niche behind the bookshelf, is given to the Dharmadhātuvāgīśvaramañjuśrī mandala, and the four-armed Mañjuśrī, so common in Alchi, is also represented prominently on a side wall of the niche of Śākyamuni. This distribution reflects the gradual shift from the Vairocana to Mañjuśrī as is apparent in the Alchi group of monuments and at Dunkar; at both sites there is a temple dedicated to Mañjuśrī. In addition, already familiar themes are the life of the Buddha, the Mahāsiddha and several representations of bKa’-brgyud-pa lineages.

The ‘new’ themes are largely well known from 13th century Central Tibetan painting and/or stem from the Anuttarayoga-Tantras, which were apparently not represented in the western Himalayas until the thirteenth century. These themes are either represented as complete mandalas, as e.g. a Vajrayoginī-, a Cakrasaṃvara- , and a Mahākāruṇika mandala, or assemblies of mandala deities with a large central deity and the secondary deities placed around it. Among those depicted in the latter fashion are Amitāyus, other variants of Cakrasaṃvara, Hevajra and numerous fierce deities.

Among other themes known from Central Tibetan 13th–14th-century thangka painting are the different Buddhas flanked by Bodhisattvas, Śākyamuni in the Bodhgaya temple, and Bodhisattvas with their secondary deities. In addition, a large representation of Guru Rinpoche occupies a prominent position on the left-hand wall of the main niche.

The gallery level has a much simpler iconographic programme, with each wall section dedicated to a single assembly only, once represented in the form of a mandala. There is an emphasis on the five Buddhas and their assemblies, and there are no representations which can be attributed to the highest tantra class.

The lantern is somewhat different again, with a complete wall dedicated to the five Buddhas and their consorts sitting on their lap, an iconography that is rarely found. Although other references to the highest tantra class are rare, the iconographic programme is more akin to the ground floor than to the gallery.