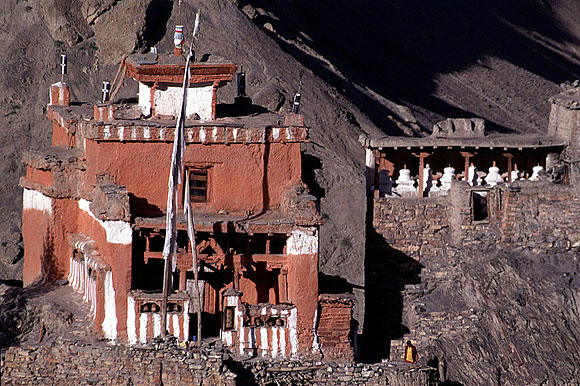 Description of the monument 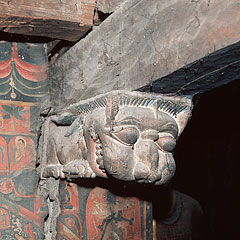 The Avalokiteshvara temple is the last remaining, structurally intact part of the former fortress which is situated above Wanla village. Positioned on a roughly north to south running ridge it can be accessed by winding paths from both valleys. The main axis of the temple runs from northeast to southwest, with the entrance and the veranda facing northeast.
As with all other Buddhist monuments of this region, the temple features a clear geometric cubature. The ziggurat-like form of the temple has three storeys and contains three niches at the back (south) and the sides, which all have flat roofs.

The building is entered via a formerly open veranda or porch, which now is partially closed by a construction housing prayer wheels. Also most of the other external temple walls host these later added niches for prayer wheels and the Tsha Tsha (votive objects made of clay).

The second storey can be accessed by a window-like door from the roof of the veranda. The third storey in form of a lantern consists of a lightweight construction, and is simply placed centrally on the ceiling of the second storey. 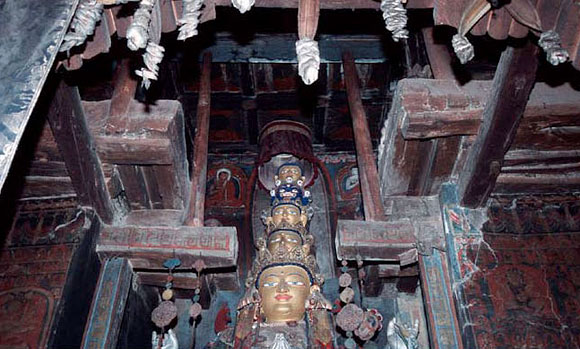 The square plan of the ground floor measures 5.5 m. In its centre four massive columns form a smaller square of 2.15 m, which relates to the width of the niches. These columns, together with the corresponding supports on second storey and lantern level carry the major beams. Within this central square one can look straight up into the lantern, as the second storey is an open gallery.

The upper floor is actually a gallery which is only interrupted at the back wall of the main niche. Structurally, it is divided into two sections, demarcated by the back beam that transverses the room at roof level of the back niche. This massive beam carries a painted wall bridging the difference in the roof levels of the two parts of this floor. This storey is, thus, divided into two parts: the back one with a very shallow gallery and a low ceiling, and the front one which faces the paintings on the wall above the beam and has a wider gallery and a higher ceiling.
The difference in the ceiling levels is reflected in the height of the supports that continue the columns of the ground floor, with the two back supports 80 cm shorter than the front ones. These supports have only unadorned consoles. The apse and the area immediately in front of it are fitted with a coffered ceiling. The paintings on the coffers imitate textiles. 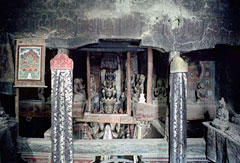 A massive beam carries a wall bridging the difference in the roof levels of the two sections of the gallery;
photo J. Poncar.

The small lantern in principle continues the central square formed by the columns/ supports of the two floors below. Interestingly, the lantern is a light-weight structure simply mounted upon the wooden structure below it. A cross-beam of the gallery level ceiling divides the opening of the lantern in halves, creating the impression that the lantern has been an afterthought added onto an already finished structure. Nevertheless, the paintings in the lantern conform to those of the lower floors.
The lantern itself is a cubical structure. The exterior is characterised by a flat roof, whereas the interior has a gabled roof construction.