Detailed description of the architecture –
construction and work techniques

To create a site stable and large enough to erect the temple area on the hill top, a supporting structure of dry stone walls was built on the north east and south west of the ridge. 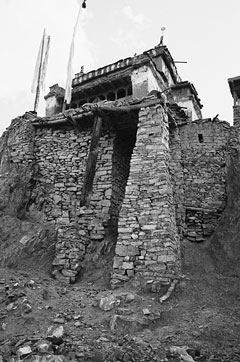 The supporting structure of the area
in front of the temple entrance;
photo Christian Luczanits.

Investigations revealed that in fact the temple foundations only rest on bedrock.
The exterior of the temple is covered with earthen plaster onto which several layers of whitewash had been applied.
The building’s silhouette is characterised by the interplay of different roof heights of the lantern, the gallery level (main roof), the side niches and the roof above the porch. All of the roofs are accentuated by cornices. 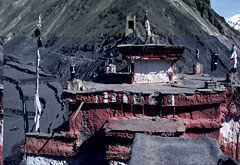 Investigations revealed that the external roof carries a load of several layers of earth which add up to approximately 40 cm of height. According to the traditional method of roof construction a shrub layer is the basic layer, followed by several layers of clay, the ﬁnal one consisting of tiny particles. In the areas of the double roof construction, this weight is distributed on logs with a diameter of 6 to 8 cm. These roofs have a hollow space of about 60 cm height, which results here in a total roof height of up to 120 cm. 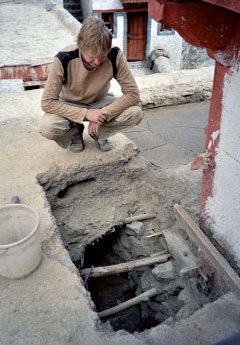 The roofs are carried by the external walls and the multipart, jointed timber construction inside the building with a height of approximately 7 metres. The massive stone walls are up to 150 cm wide and bound by earthen mortar. The walls are ﬁnished in plaster, whereby the interior walls’ plaster also carries wall paintings.

The lantern, executed as a rather plain and light-weight structure, is simply mounted upon the wooden structure below it, thus giving the impression of having been attached at a later stage. The ceiling beams continue without interruption below the lantern. This may suggest that the roof, once closed, subsequently had been opened to create a three-storey-building. 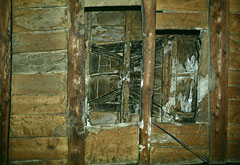 View into the ceiling construction
of the gallery and lantern;
photo Christian Luczanits.

On the second ﬂoor the internal wooden construction consists of two main beams which are embedded in the walls and sit on rather primitive wooden consoles. In their points of third these beams are each carried by two supports (ﬁg.2). The beddings of the beams are saddles, which carry the main load of the shear forces. 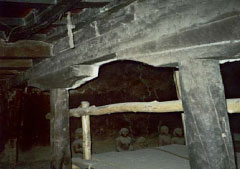 It is noteworthy that these supports have a different height. The two columns situated in front of the apsis are 80 cm shorter, resulting in a lower position of the back major beam. The remaining height up to the gallery ceiling was walled up, plastered and painted from the front. Instead, the ceiling of the area in behind the back major beam and the apsis itself is only about 1 ½ ﬂoors high, thereby formally extending the apsis, an attached element, into the central space. This area is rendered as a coffered ceiling made of ﬁnely decorated, wooden plates. 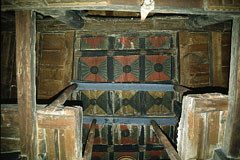 View up to the coffered ceiling;
photo Christian Luczanits.

Textile bridges the gaps between each of the wooden panels. The paintings were carried out in situ on a whitish ground. The black thin lines were painted at the end of the painting process in a quick freehand manner. The blue beams were painted after the panels. 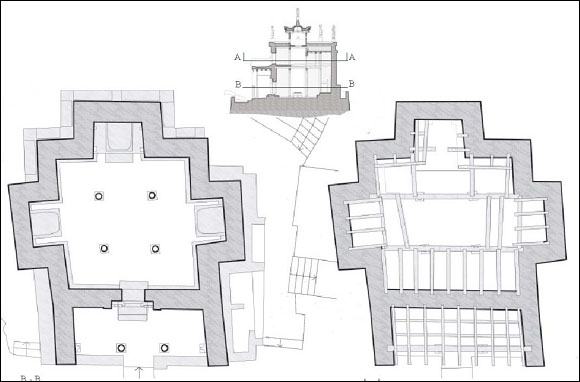 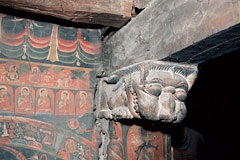 The supports at gallery level rest on another pair of beams that divide gallery level from ground floor level. (ﬁg. 4). The beams are laterally supported by lion consoles and also rest on four supports, in this case fluted columns with carved capitals. These extensions of the gallery level supports are 5 metres long and rest on wooden bases, which provide for the weight distribution to the building ground. 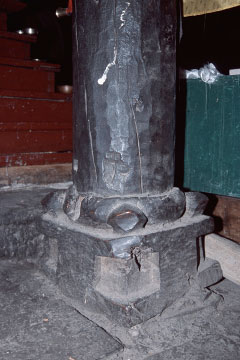 The temple still contains all its original columns, brackets and capitals. The capitals carved with the Eight Auspicious Symbols (bkra-shis rtags brgyad) and the Seven Jewels of a King (rin-chen sna-bdun), are in perfect condition. The painting of these capitals appears to have been added more recently. At the gallery level only the sides visible from the ground floor bear carvings. 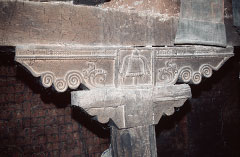 More remarkable even is the preservation of the exterior wooden construction and most of the carvings at the veranda and the door.
The temple entrance is a double-winged door with a richly carved door frame.
The doorframe is decorated with rows of Buddhas, scenes of the Life of the Buddha, as well as an “om mani padme hum” flanked by two stupa. The latter panel at first impression looks as if it would be from a renovation but fits perfectly to the iconography of the main image.

The porch is shaped by an extension of the lateral temple walls, and a wooden construction which carries the roof. The wooden structure consists of lateral pillars attached to the side walls, and two central fluted columns with bases. They divide the entrance area in three equal sections. The columns have carved capitals and the pillars have smaller capitals carrying lion consoles. Two beams lie on this construction that meets in the middle with two carved elephants. The gap is bridged by a trifoliate arch, flanked by several small columns to each side, which are decorated with symbols of luck. Altogether they support the main beam of the porch roof.

The wooden construction is characterised by different types of joints, which are for example mortise and tenon joints, dowels, and nogging pieces. The complete trunk including the heartwood was utilised respectively and mostly has many knotholes. These wooden elements are therefore prone to the formation of radial cracking. Two extremely bent trussings indicate an askew growth.

All of the external woodwork is completely covered with several layers of red paint, deriving from different periods.