The three-storeyed temple of Wanla within the ruins
of a castle on a prominent rock;
photo Christian Luczanits.

Wanla is a village in Lower Ladakh located at the confluence of two streams (Yalpola and Shillakong) in a side valley between Khaltse and Lamayuru on an altitude of approximately 3260 metres. The valley opens out at this point and is relatively flat and fertile. The village houses are placed on the slopes around a prominent rock hill that once boasted an impressive castle. Today the ridge is dominated by the lofty structure of the three-storeyed Wanla temple and a adjacent residential building erected in the 1980s. Of the castle, which once surrounded the temple, only two towers from different periods and a number of walls remain. The temple is oriented towards the north eastern side valley which hosts the probably oldest part of the village.

The three-storeyed Avalokiteshvara Temple is owned by the Drigung Kagyu order, one of the three main orders of Tibetan Buddhism in the region. Even more, as the founding inscription in the temple records, the temple has originally been built for this order some 600 years ago. Of this order it represents one of its earliest monuments preserved, not only in the region but throughout the Himalayas. 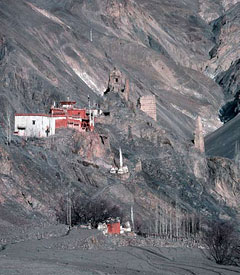 Access to the Wanla temple
from the north side;
photo Christian Luczanits.

Today, Wanla is one of the sub-monasteries of Lamayuru, which is one of the main seats of the Drigung order in Ladakh with all the smaller monasteries and village temples in the region subordinated to it and managed by it. Lamayuru provides at least one caretaker monk who is responsible for daily ritual and granting access to the temple by villagers and visitors. The temple is the focal point of devotion in the village. There is an additional small monastic community in Wanla using a more recent temple at the end of the side valley dominated by the spur on which the Wanla temple is located.

In many respects the Wanla temple is a jewel and its value as historical monument is widely underestimated. In Wanla not only a practically complete monument of the founding period is preserved, but the temple even contains an extensive inscription relating to the history of the foundation. Together with the art historical evidence, Wanla provides information on an otherwise practically unknown period of Ladakh’s history, the late thirteenth or early fourteenth century. This information is also highly relevant to the history of Tibetan Buddhism in general, as the art preserved at Wanla also provides early evidence of the reception and adaptation of Central Tibetan Buddhist art in the Western Himalayas. 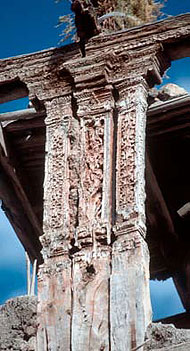 Fragmentary woodcarvings on a balcony of one tower of the Wanla castle;
photo Christian Luczanits.

In the chronicles of Ladakh, Wanla is mentioned for the first time when the Ladakhi King Lhachen Ngaglug (lHa-chen Ngag-lug) is said to have built a castle at Wanla in a tiger year. This event likely occurred at some point in the 12th century. It may well be that parts of the present-day ruins go back to this original foundation. However, while it is rather unlikely that the remaining fragmentary woodcarvings on a balcony of one tower are remnants of the original foundation, it is also not entirely impossible.

At the time of the events described in the Wanla inscription, the castle already existed and was home to the four sons of a minister of an unnamed government in the Wanla valley termed rgya-shing. The eldest son, a certain Bhagdarskyab (’Bhag-dar-skyab), is the hero of the inscription and the founder of the temple. He was first appointed leader of the district (mi sde’i gtso-bo skos) and at the age of thirty took over the throne of the small kingdom around Wanla. Consequently, he is said to have conquered the surrounding region from Wakha, Kanji and Suru in the south to Alchi, Mangyu and Ensa (?) in the north, i.e. a substantial region of Lower Ladakh. He further is said to have been offered the throne of Kashmir and to have collected tribute from the northern nomads. Finally, the Wanla Tashisumtseg (Three-storeyed Auspicious, bKra-shis-gsum-brtsegs) temple, as the temple is called in the inscription, is erected at the centre of the castle. These events occur in an otherwise completely obscure period of Ladakh’s history between the foundation of the Alchi group of monuments, the latest of which are to be attributed to the early 13th century, and the establishment of the Ladakhi kingdom in the early 15th century.

It is apparent from the architecture and the name, that the Wanla temple can, to a considerable extent, be understood as a reference to the Alchi monuments, particularly the gSum-brtsegs. However, the architecture, the sculptures and paintings all display enormous technical and cultural divergences.